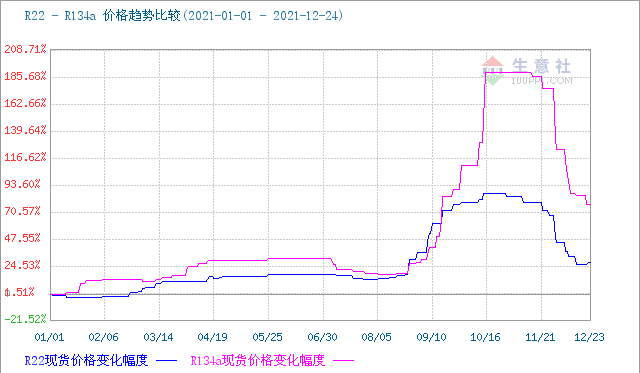 In the first quarter, R22 first declined and then rose, rising 11.16% during the quarter. In January, the new R22 quota was opened. In addition, the raw material chloroform companies cut prices to prevent excessive market inventory pressure. At the same time, during the Spring Festival, downstream work was suspended for holidays, and the cost demand was weak. As a result, R22 companies were unable to support the market, and the price fell 12.38 during the month. %. In February, raw materials rose, superimposed traders returned to the market one after another, hoarding increased intentionally, rising 4.29% during the month. In March, trichloromethane rose by more than 1,000 yuan, with an overall monthly amplitude of 42.24%. In addition, the demand side is gradually changing from the off-season to the peak season. The air-conditioning market is expected to improve, and the export aspect is also improving. The refrigerant manufacturers have no pressure on shipments. Limited push up, a 7.9% increase in the month.

R22 continued to rise in the second quarter, rising 5.44% during the quarter. In April, the price of raw material chloroform continued to rise to 4,100 yuan/ton, an increase of about 9% within the month, and the cost side supported R22's rise of 4.18% in the month. In May, due to environmental protection policies and other factors, demand did not increase significantly, and the cost side drove R22 to rise slightly by 1.47% in the month. In June, raw materials fluctuated at a high level, demand continued to be weak, and the market transaction atmosphere was general. During the month, prices remained weak and stable without significant adjustments.

R22 rose rapidly in the third quarter, with a 52.78% increase in the quarter. In July, cost demand continued to be weak. Demand in the air-conditioning industry fell sharply. The prices of refrigerant companies were reduced to shipments. However, prices supported by quotas did not fall sharply, with a decrease of 3.77% during the month. In August, due to cost and quota factors, the market supply was tightened, and manufacturers were reluctant to sell, especially in the second half of the year when prices soared, with a monthly increase of 8.06%. In September, trichloromethane surged by about 33%, refrigerant manufacturers' operating load declined, limited sales, and market hype sentiment rose, with a 31.62% increase in the month

In the fourth quarter, R22 dropped from its high level, and prices dropped frequently. In October, raw materials fluctuated at a high level, but the demand in the R22 market application field was reduced, demand support was weak, enterprises were weak in price, and prices were loosened, with a 2.6% increase in the month. In November, chloroform dropped by nearly 50%, cost support collapsed, and due to import and export licenses, exports were not smooth. R22 dropped 19.41% in the month. In December, exports ended in mid-December, exports continued to weaken, and the downstream stocking sentiment was negative at the end of the year. The domestic market was lightly traded. Near the end of the month, prices rose slightly due to quota factors. 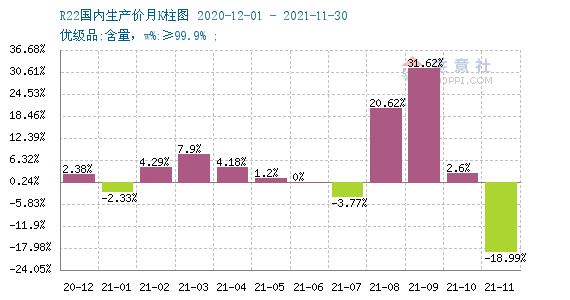 R134a fluctuated in the first quarter, rising by 16.76% during the quarter. In January, due to the overhaul of part of the raw material hydrofluoric acid equipment and the tight supply, the refrigerant manufacturers were forced to reduce the load to operate. R134a increased by 12.38% in the month. In February, the market was relatively calm, with R134a rising 0.51% steadily within the month. In March, some refrigerant manufacturers had maintenance plans, and most of them reduced their loads. The on-site supply has been tightened, and the market has been promoted obviously, with a small increase of 3.37% during the month.

R134a continued to rise in the second quarter, rising by 8.69% during the quarter. In April, there was no significant change in fundamentals, and most companies adjusted their quotations within a narrow range according to the shipment situation, which rose by 3.37% during the month. In May, the trichloroethylene market continued to rise. Under the flat demand, R134A rose by 1.47% in the month. In June, Merlin, Yonghe and other new production capacity entered the market, and the auto market's off-season demand weakened, supply growth and demand decreased, and the R134a offer was loosened.

In the third quarter, R134a bottomed out and rose strongly, with a quarterly increase of 60.61%. In July, the demand for vehicles was weak, and the shipping pressure of the holders increased. The prices continued to be cut for shipments. Some of the profits may be upside down, which basically bottomed out. R134a fell 9.88% in the month. In August, the first half of the month went smoothly, while in the second half of the month, the price of raw materials increased, and due to cost considerations, companies actively supported price increases, which increased by 8.06% during the month. In September, there were many overhaul devices for raw material trichloroethylene, and the price soared above 15000-16000 yuan/ton. At the same time, many places were curtailed. The operating rate of refrigerant manufacturers further declined, and the cost supply was strongly supported. The price of R134a soared and skyrocketed within the month. 64.93%.

In the fourth quarter, R134a rose first and then fell, falling 15.84% during the quarter. In October, after the National Day, the price of trichloroethylene rose to 20,000 yuan, and the price of goods was tight. The cost strongly supported the price of R134a soaring. The increase in the month was 37.56%, and the price jumped to above 50,000 yuan, a new high in the past three years. In November, the price of raw material trichloroethylene fell below 10,000 yuan, and the soaring R134a was not transmitted smoothly. The demand in the auto market was lower than the same period last year. Due to the negative influence, the high price of R134 began to fall, with a decrease of 19.41% within the month. In December, R134a plummeted by 20.85% during the month, driven by factors such as falling raw material prices and poor export and domestic sales.

In the first half of 2021, the price of refrigerants showed a steady upward trend. In the second half of the year, under the influence of the dual control policy of raw materials and energy consumption, prices rose rapidly. R22 and R134a hit a new high in the past three years, and then the cost support was not supported and the price was weak due to factors such as weak demand. The sharp drop is a roller coaster market, and the price fluctuates sharply. It is the opposite of last year’s troubled state. However, the short-term rise in 2021 is not easy to replicate, or it is difficult to bring it into 2022. It is about to enter January, R22 rebounds slightly, short-term Although favorable, the new quota is open, and the price is expected to continue to rise. The high price of R134 is not smooth, and the pressure on corporate inventory is obvious. It is expected that the price will continue to decline. More attention should be paid to the trend of raw materials and market news guidance.