The domestic market price of refrigerant R22 still showed an upward trend in April. This month, the domestic refrigerant R22 manufacturer's offer price rose by 500 yuan/ton supported by cost, and the actual market transaction price rose steadily and slightly. In terms of raw materials, the market for anhydrous hydrofluoric acid has stabilized, 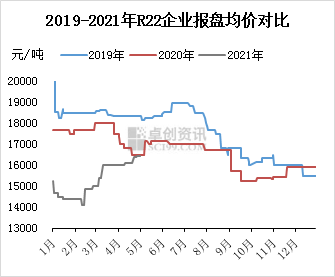 and the overall trend of chloroform has shown an upward trend, which has a strong supporting effect on the cost of R22. In terms of supply, the overall construction was started within the month to maintain stability. At the end of the month, the Merlin plant reduced the load slightly. The overall market supply was stable, and the overall supply focus was on the raw material level. In terms of demand, the overall demand side of ODS-grade R22 continues to be deserted, and the willingness to purchase at high prices in the trade link is poor, and most of them take goods on demand; the downstream demand for tetrafluoroethylene is strong, and the overall demand for raw materials is relatively strong. At the end of the month, the actual transaction price in East China was concentrated at RMB 15,500-16,000/ton. In April, the average monthly price of domestic R22 manufacturers was 16,173 yuan/ton, up 3.16% from the previous month, and the average monthly price in the same period last year was 16,864 yuan/ton, down 4.09% year-on-year.

In April, the domestic refrigerant R134a was mainly supported by costs. The offer price continued the upward trend at the end of March,and the price rose to a high level. In terms of raw materials, trichloroethylene is supported by the price of calcium 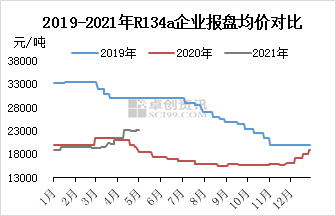 carbide,  and the overall price is high and tight. The traditional monthly pricing has been transformed into a single talk, and the supporting role of the cost side is obvious. In terms of supply, due to the tight supply of trichloroethylene, the load of some installations was low. During the month, Sinochem's Taicang installation was overhauled, and the Dongyangguan 10,000-ton installation was started. The overall market supply declined. On the demand side, foreign trade exports and car factory demand are mainly stable. The after-sales market continues to be deserted. Traders have poor shipments and poor willingness to purchase at high prices. Most of them are based on rigid demand. The overall market supply and demand are weak, and there is an obvious phenomenon of price but no market. At the end of the month, the market intention transaction price in East China was concentrated at 22500-23000 yuan/ton. In April, the monthly average listed price of domestic refrigerant R134a manufacturers was 22,736 yuan/ton, an increase of 14.87% from the previous month, and the monthly average price of the same period last year was 20,591 yuan/ton, an increase of 10.42% year-on-year.

In April, the domestic demand for refrigerant R32 continued positively, and the market competition was fierce. The price 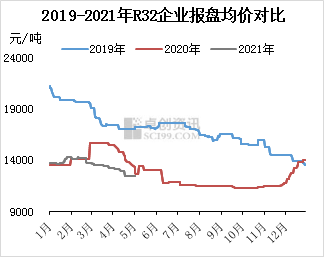 stalemate declined in the first half of the year, and the price remained basically stable in the second half of the year.The high price in the early period dropped sharply, and the overall market remained stable after the downturn. On the one hand, the peak season for demand on the air conditioner production side continued, and the price of anhydrous hydrofluoric acid on the raw material side remained stable. On the other hand, due to the overcapacity of the industry as a whole, some manufacturers stopped to wait and see under the pressure of high costs. The competition among raw material supporting enterprises was fierce, and low-price competition drove down transactions. At the end of the month, the mainstream transaction prices in the East China market were concentrated at 1,2000-12,500 yuan/ton. In April, the average monthly price of domestic R32 manufacturers was 12,806 yuan/ton, down 5.22% month-on-month, and the monthly average price of the same period last year was 14,584 yuan/ton, down 12.19% year-on-year.

In April, domestic refrigerant R125 manufacturers concentrated on delivering foreign trade export orders. The domestic supply was tight, and the price of R125 rose strongly. R410a was supported by the cost of R125, and the market also rose. 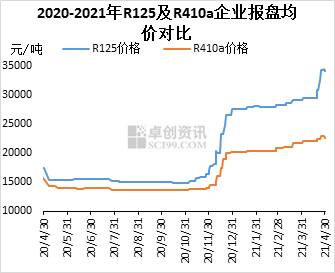 On the one hand, the delivery time for R125 foreign trade exports is approaching, and the phenomenon of concentrated exports is obvious. The overall domestic start-up is high, causing domestic tetrachloroethylene to be tight, and the price has climbed to more than 10,000 yuan. Due to limited supply, the R125 bulk order quotation is high. The demand side of R410a is mainly supplied to air-conditioning plants, and the after-sales market performance is deserted. Although supported by the high cost of R125 and the high price, the overall market transaction situation is not ideal, and the price increase is relatively lagging. At the end of the month, the intended price of refrigerant R410a delivered to the East China market was 21,000-21,500 yuan/ton. In April, the average monthly price of domestic R125 manufacturers was 31154 yuan/ton, an increase of 8.41% from the previous month, and the monthly average price of the same period last year was 17,870 yuan/ton, an increase of 74.34% year-on-year.