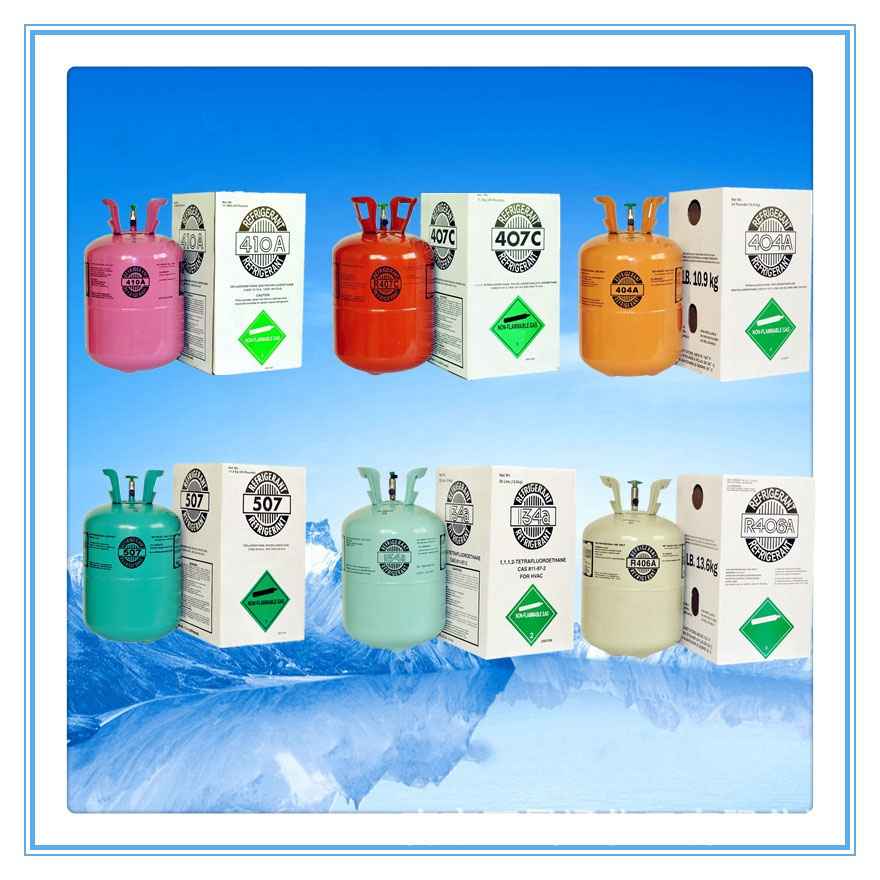 R23 refrigerant is an ultra-low temperature refrigerant trifluoromethane. Its aliases are HFC23, HFC-23, F23 and F-23.

R32, also known as HFC-32, difluoromethane, molecular formula: CH2F2, is a new type of environmentally friendly refrigerant, does not contain chlorine, has no damaging effect on ozone, but is flammable and explosive. It is one of the substitutes for R22 refrigerant and R410a refrigerant.

R134a is the most widely used medium and low temperature refrigerant. Due to its good overall properties, R134a is a very effective and safe alternative to R12. Mainly used in most fields of R12 refrigerant.

The full name of R290 refrigerant is refrigeration grade propane, and the chemical formula is C3H8. R290 is a hydrocarbon refrigerant; it has no damage to the ozone layer and has a small greenhouse effect. It is one of the most environmentally friendly refrigerants.

R600a is an excellent hydrocarbon refrigerant made from natural ingredients that does not destroy the ozone layer and has no greenhouse effect. It has the characteristics of large latent heat of evaporation, strong cooling capacity, good flow performance, low conveying pressure, low power consumption, and slow recovery of load temperature. It is compatible with a wide range of compressor oils. (Note: When the R600a refrigeration system is insufficient, the pressure value is too large, the machine sound is abnormal, and the compressor life is shortened). R600a is a colorless gas at room temperature, and a colorless transparent liquid under its own pressure. It is a replacement for R12.

R433b refrigerant is a hydrocarbon refrigerant, and its thermal performance is similar to that of R22. No need to change the original refrigeration system, it can directly replace R22. R433b has larger latent heat of evaporation than other refrigerants, faster cooling rate per unit time, smaller molecular weight, better flow performance and lower delivery pressure. It can reduce compressor load, extend compressor life, reduce power consumption, and reduce system operating costs.

R436A is a hydrocarbon refrigerant that does not destroy the ozone layer and has no greenhouse effect. The thermal properties of this refrigerant are similar to R134a. The mole percentage of R436A composition: R290 accounts for 62.6528%, R600a accounts for 37.3472%.

R407c is the easiest choice to replace Freon R22 on newly installed refrigeration equipment (usually air conditioning systems); however, due to the differences between R407C and R22 in physical and chemical properties, theoretical cycle performance, compressor oil, etc., it is used in the initial installation. R22 refrigerant. For after-sales maintenance of refrigeration equipment, if it is necessary to add or replace refrigerant, only R22 can be added, and R407c cannot be directly replaced with R22.

R410a is a new environmentally friendly refrigerant that does not destroy the ozone layer. The working pressure is 1.6 times that of R22. High cooling efficiency and improved air conditioning performance. The new refrigerant R410a consists of a 50% quasi-azeotropic mixture of R32 and R125. Stable, non-toxic and superior performance.

Compared to R22, the cooling capacity of R410a is significantly increased, allowing the design of smaller and more compact air-conditioning units. Due to R410a's near-azeotropic physical properties, the refrigerant temperature slip is less than 0.2 °C over the entire operating range.

It is a mixture of R125 refrigerant and R143 refrigerant, which is an environmentally friendly refrigerant that does not destroy the ozone layer. Mainly used in medium/low temperature commercial refrigeration systems. It is a long-term replacement for R-502 refrigerant (an HFC based substance), has zero ODP and does not contain any ozone depleting substances. Since R304 refrigerant is very close to R502 in cooling capacity and efficiency, and has excellent heat transfer performance and low toxicity, R507 is more suitable for medium and low temperature refrigeration applications than any other R-502 alternative.

R717 (ammonia) refrigerant, ammonia is a medium temperature refrigerant, the chemical formula is NH3, the boiling point temperature is -33.4°C, the freezing point is -77.7°C, the critical temperature is 133°C, and the critical pressure is 11.417 MPa. Pure ammonia has no adverse effect on lubricating oil, but when there is moisture, it will reduce the lubricating effect of refrigeration oil. In ammonia refrigeration systems, copper and copper alloys are not used for piping and valve components.

R717 (ammonia) has a mature synthesis process, easy preparation, low price, no damage to the ozone layer, and no greenhouse effect. The pressure of ammonia refrigerant in the condenser and evaporator is moderate (the condensation pressure is generally 0.981 MPa, and the evaporation pressure is generally 0.098-0.49 MPa); the cooling capacity per unit volume is greater than R22; the latent heat of vaporization is large, and the refrigeration and heat release coefficients are high. . Ammonia refrigerant is widely used in large refrigerators and supermarket food display cabinets.

Ammonia vapor is colorless and has a strong pungent odor. Ammonia is highly toxic to humans and can cause frostbite when splashed on the skin. When the volume of ammonia vapor in the air reaches 0.5-0.6%, it can cause an explosion. Therefore, the concentration of ammonia in the air of the equipment room shall not exceed 0.02mg/L. Ammonia is not easily combustible at room temperature, but decomposes into nitrogen and hydrogen when heated to 350°C. When hydrogen gas mixes with oxygen in the air, an explosion occurs.

By reading this introdcution article, we hope you have a main idea of the basic difference and application of different types of refrigerant gas.