Refrigerants are in trap in 2020, and the overall price declines

According to the data monitored by the business agency, the domestic mainstream average price of R22 was 17,333 yuan/ton at the beginning of the year, and the mainstream average price at the end of the year was 14,333 yuan/ton, a decrease of 17.31% during the year. The annual lowest price is 14,166 yuan/ton, the highest price is 18500 yuan/ton, and the annual maximum amplitude is 25.23%. 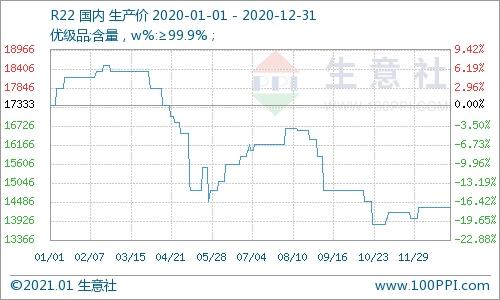 According to the data monitored by the business agency, the domestic mainstream average price of R134a was 23,166 yuan/ton at the beginning of the year, and the mainstream average price at the end of the year was 17,500 yuan/ton, a decrease of 24.46% during the year. The annual lowest price is 15066 yuan/ton, the highest price is 23333 yuan/ton, and the annual maximum amplitude is 35.43%. 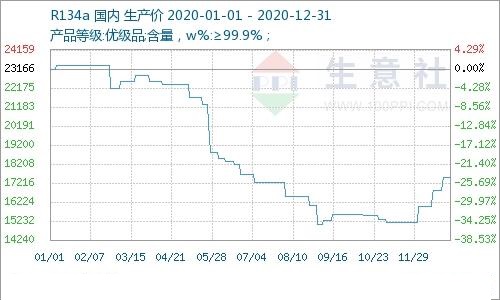 Throughout the year, the domestic R22 market was relatively volatile, like riding a roller coaster. In the first quarter, R22 stabilized after rising. The raw material hydrofluoric acid and chloroform market was relatively stable. At the same time, due to public health incidents, parking factories were delayed and transportation controls were severe. In addition, there were not many refrigerant R22 quotas and enterprises received limited orders. R22 formed support, prices started to rise, and the overall increase in the first quarter was 5.77%. Entering the second quarter, R22 first fell and then rose, the raw material end hydrofluoric acid price fell, the support for refrigerant R22 weakened, foreign special events were serious, the refrigerant terminal export was not smooth, and the main supply of the domestic market, but the domestic air-conditioning industry started low. After-sales demand for repairs is weak, and R22 prices are under pressure to lower. Since May, the market has continued to rise. As the price of the refrigerant R22 dropped sharply in the early stage and dropped to a low level, due to cost considerations, the large manufacturers with quotas increased the price, and the price of R22 remained high, and the upward trend continued until August. However, there was an inflection point in September. The raw material hydrofluoric acid remained weak and stable, and the supporting force was general. The export volume of refrigerants was expected to decline. The output of downstream air conditioners was low and demand was scarce. The off-season effect of the after-sales market continued. Demand continued to weaken. R22 prices fell. In November, the market began to rise again. In December, many companies had insufficient quotas and limited orders. Most companies closed and suspended reports. The firm trend continued until the end of the year.

The market for R134a in 2020 is generally sluggish, with a strong rise around the fourth quarter and an eye-catching performance. In the first quarter, R134a was affected by public health incidents, delayed start of parking factories, severe traffic and transportation controls, and price declines. In March, the cost surface was strongly supported. In addition, the auto industry's refrigerant stock increased and demand recovered. R134a rose slightly. Trading was not good in April, R134a started the downward mode, and the weak market continued until August. September ushered in an inflection point. The raw material trichloroethylene suddenly rose sharply, boosting the price of R134a, but the demand side was insufficient, the macro economy was down, the development of the automobile industry was not optimistic, the demand for refrigerant R134a was flat, and the market competition was fierce. In order to maintain old customers, some companies have the phenomenon of cost upside-down shipments, and R134a is moderately adjusted. Entering December, the R134a market rose sharply, and the company's monthly increase was 500-2000 yuan/ton. The price of raw material hydrofluoric acid has risen. It is reported that the price of trichloroethylene has risen rapidly. The cost support is strong. In addition, some manufacturers have overhauled their equipment and supply shortages. This has boosted the price of refrigerant R134a to continue to rise, but it is lower than the same period last year.

According to the monthly fluctuation chart of R134a from January to December 2020, it can be seen that R134a fell in February, April, 5, 6, 7, 8, 10 and November in 2020. The biggest drop was in May, and the biggest increase was in December. The lowest point of the whole year was September, the price was 15066 yuan/ton. The highest point of the whole year was January, the price was 23333 yuan/ton, and the biggest amplitude of the year was 35.43%. 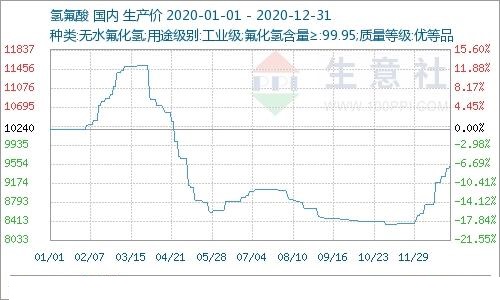 To sum up, in 2020, refrigerant prices went down as a whole, mainly due to the relationship between supply and demand. The short-term positive injection was difficult to shake the weak market. Although there was an upward trend, the price was significantly lower than the same period last year. Entering 2021, the new R22 quota will be opened, the prices of some companies will be slightly adjusted, and mainstream manufacturers will sell at stable prices. It is expected that the market will remain stable in the short term. The market for R134a is still strong, and the cost side is strongly supported. It is expected to rise but not fall in the short term. More attention should be paid to market news guidance.