USA "returns to the group", or speeds up the elimination of HFC refrigerants

On January 27, 2021, US time, the new US President Biden ordered the government to prepare to submit the Kigali amendment to the Montreal Protocol on Substances that Deplete the Ozone Layer to the Senate for the gradual reduction of hydrofluorocarbons (HFCs). Approved. This is after Biden announced on his social media on December 13, 2020 that the United States will return to the "Paris Agreement" and once again signaled that the new US government is willing to unite the world to face the climate and environmental crisis.

It is understood that the Kigali Amendment and the Paris Agreement are both models of global cooperation in the governance of climate and environmental issues. Among them, the Kigali amendment was reached in October 2016. According to the requirements, most developed countries will reduce the production and consumption of HFCs from the effective date of the Kigali Amendment on January 1, 2019, by 10% from the baseline level that year, and 85% by 2036; most of them. Developing countries will freeze the production and consumption of HFCs in 2024, and start reducing them in 2029, with a 10% reduction in that year and an 80% reduction in 2045. 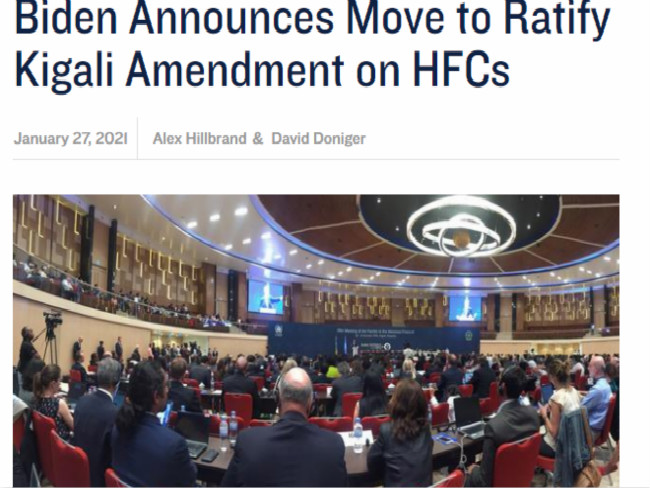 Although former U.S. President Trump has announced his withdrawal from the Paris Agreement, the Biden administration’s active "return to the masses" may make India and its allies also actively support the Kigali Amendment, and the elimination of HFCs may be accelerated.

China has always been an active supporter of global climate and environmental governance. In response to the imminent elimination of HFCs, the room air conditioner industry took the lead in choosing a zero ODP, low GWP hydrocarbon working fluid-propane (R290) refrigerant in the HCFC replacement process. This technical route not only meets the management and control requirements of the Kigali Amendment, but is also a technical direction for the industry's future sustainable development. It will also make a huge contribution to the reduction of greenhouse gas emissions in China and the world.

In addition to the production line transformation, with the support of the Foreign Cooperation Center of the Ministry of Environmental Protection, the industry and scientific research institutes jointly carried out R290-related research, such as safety risk assessment, performance research, installation and maintenance. At the same time, in recent years, China’s major air-conditioning companies have accumulated a lot of experience and data on R290 replacement, in product development, in application technology research, R290 air-conditioning compressor matching, and R290 air-conditioning installation and maintenance. Including the marketization of R290 air conditioners, many active explorations have been made.

As the United States returns to the Kigali Amendment, R290 air conditioners may usher in a huge development opportunity, and marketization is expected to accelerate.