What is the difference between ammonia refrigerant and fluorine refrigerant? What are the advantages and disadvantages? 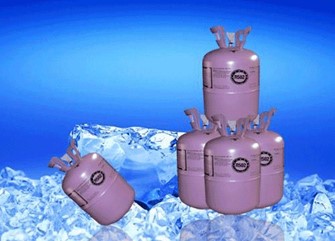 Ammonia refrigerant is an environmentally friendly refrigerant, but its biggest feature is its toxicity and explosiveness, fluorine refrigerant has a damaging effect on the ozone layer, and its biggest advantage is its safety and reliability.

Shaft seals are required to seal the passage of refrigerant and oil leakage, which is also the object of frequent maintenance by users. It is necessary to configure complex oil system components such as separate oil separators and oil coolers, which makes the unit bulky and inconvenient for maintenance, heavy weight and large floor space.

low efficiency. Due to the need to use an external motor to drive the oil pump and use an ordinary low-efficiency motor, its efficiency is low. The energy efficiency ratio of the air conditioner is generally not more than 3.9 under the nominal working condition. Generally, a single compressor type is used. Once a fault occurs, the user will be unable to use it. Especially for the cold source used in the production process, the user will lose a lot.

(Note 1: JB/T6906 "Screw Single-Stage Refrigeration Compressor" stipulates in Article 5.14: The amount of oil leakage at the shaft seal when the open type machine is running should not be greater than 3ml/h. The oil is mutually exclusive. The simultaneous leakage of Freon and refrigeration oil cannot be avoided during use. Especially after 1000 hours of operation, due to the wear of the shaft seal, the leakage of Freon and refrigeration oil will be aggravated, and even affect the use of users, thereby increasing the Maintenance and operating costs of users. The motor is rotated at high speed, and the air flow noise formed by the cooling fan is large. In addition, the compressor itself is also noisy, which affects the environment. The noise of open-type units is above 85dB(A).)

The advantages and disadvantages of this type of semi-hermetic compressor are as follows:

Due to the semi-closed method and the integrated design of the motor and the compressor, the noise is low, the vibration is small, and there is no leakage of freon and refrigeration oil of the open unit, which reduces the maintenance cost of the user, and does not cause leakage due to leakage. It affects the normal use of the user; due to the semi-closed method, the motor and the compressor are integrated, and the built-in oil separator muffler greatly reduces the running noise. The noise difference between the open and closed type of the same cooling capacity is about 20dB(A); due to the built-in oil separator, the internal pressure difference oil supply method is adopted, the system structure is simple, the volume is small, the weight is light, the moving parts are few, and the reliability is improved; The fluorine-resistant machine and the internal pressure differential oil supply method do not need to be equipped with an external motor to drive the oil pump, which improves the energy efficiency ratio of operation. The energy efficiency ratio is generally greater than 4.1 under the nominal working condition of the air conditioner; for higher requirements, double heads can be used. Or three types, each refrigeration system is relatively independent, once a system fails, other systems can work normally without causing too much impact on the production and working environment.

Since most of the semi-hermetic screw compressors currently used in China are imported from abroad, the cost price is high. Due to the use of fluorine-resistant and oil-resistant special high-temperature-resistant motors, the cost is high and the cost of compression materials is increased, so the sales price of semi-hermetic compressors of the same grade is higher than that of open compressors. The capacity of a single machine is small, and the current capacity of a single machine head generally does not exceed 1 million kcal.

Ammonia is a natural refrigerant with 0 ODP and GWP. It has no effect on the atmospheric ozone layer and the greenhouse effect. It is an environmentally friendly refrigerant.

Ammonia is highly toxic and has a strong stimulating effect on human organs. When the volume fraction of ammonia vapor in the air reaches 0.5~0.6%, people will be poisoned if they stay in it for about half an hour; When it reaches 11~14%, it can be ignited (yellow flame), and if it reaches 16~18%, it will cause an explosion. Ammonia vapor has a polluting effect on food, therefore, the ammonia machine should be kept ventilated so that the ammonia content does not exceed 0.02mg/

It is miscible with refrigeration oil, no complicated oil is needed, and the structure is simple, small in size and beautiful in appearance.

R22 does not burn, does not explode, and has very little toxicity.

Freon chillers have strong versatility. At present, more than 95% of refrigeration units in the world use fluorine refrigerants.

At present, the commonly used refrigerant is R22, its ODP=0.05, and the GWP index is also high. It is a transitional refrigerant. my country's 1998 "National Plan" stipulates that R22 is completely banned for use in 2040 (R22 refrigeration equipment is prohibited), the price more expensive.