What is the "fastest ice" paved with? These listed companies participated in the refrigeration of the Beijing Winter Olympics!

On the day of the beginning of spring, the Beijing Winter Olympics officially kicked off.

The National Speed Skating Stadium, known as the "Ice Ribbon", is the only new ice competition venue for the Beijing Winter Olympics. It is not only unforgettable in shape, but also "both inside and outside", with 12,000 square meters of "fastest ice"... 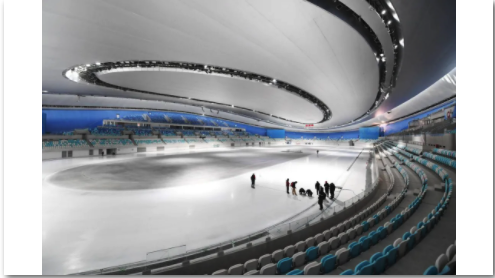 The national speed skating hall known as the "Ice Ribbon".

Why is it called "the fastest ice"? How is R449A refrigerant different from traditional refrigerants? Which listed companies are involved?

How is the "fastest ice" paved?

It is understood that traditional ice rinks usually use indirect cooling methods, such as the use of Freon refrigerants and ethylene glycol refrigerants. Since the refrigerants often do not release heat at a fixed temperature, the temperature difference between ice rinks is generally as high as 1.5℃-2 °C.

The national speed skating hall adopts a carbon dioxide direct cooling ice-making system, which not only has a higher heat exchange efficiency, but also has a uniform ice temperature with a temperature difference of basically within 0.5 °C. This technology ensures that the ice is of the same quality no matter what lap an athlete skates, helping to create the "fastest ice" for top events.

Another highlight of carbon dioxide refrigerants is low carbon and environmental protection.

Its ODS (Ozone Destruction Potential) is 0 and GWP (Global Warming Potential) is only 1. The GWP of using the same amount of traditional refrigerants is nearly 4,000 times that of carbon dioxide refrigeration. At the same time, after the waste heat generated by its refrigeration is recovered, it can provide 70 degrees Celsius hot water for domestic hot water and dehumidification regeneration. Compared with the traditional refrigeration method, the national speed skating hall uses carbon dioxide to make ice with a 30% increase in energy efficiency, saving about 2 million kWh of electricity a year.

A few days ago, COFCO Engineering said: "The national speed skating stadium project undertaken by our company mainly includes the design of the refrigeration system and ice-making process. This project will mainly undertake the opening of the Olympic Games and the competition of the Olympic speed skating event. And training, is the speed skating avenue hall using carbon dioxide transcritical ice making system, green and environmental protection, integrated heat supply design, to ensure the efficient use of energy, compared with traditional ice rinks to achieve more than 30% energy efficiency improvement.”

At the same time, the company has undertaken projects such as track refrigeration of the National Snowmobile Center.

However, industry insiders said that although carbon dioxide refrigeration has many benefits of low carbon and environmental protection, and this technology has a history of more than 20 years, it is still mainly in the stage of industrial use due to factors such as technical difficulties, and it will take some time for large-scale promotion.

The "unconventional" of traditional refrigeration

Although the refrigeration method is adopted, unlike the previous Winter Olympics, the fourth-generation refrigerant R449A, which is more low-carbon and environmentally friendly, is used in this Winter Olympics.

According to industry insiders, the GWP of the R449A refrigerant is about one-third of that of the R404A refrigerant compared with the R404A ice-making agent that was used most in ice making at the 2018 PyeongChang Winter Olympics.

In addition, the company also revealed that in recent years, Panasonic refrigerators have applied carbon dioxide transcritical technology many times in the commercial projects undertaken by them.