Why does air-conditioning refrigerant "lost money and make money"

Since 2020, the sales scale of the household air-conditioning industry has fluctuated and increased, while the upstream refrigerant industry has not increased profits. Major companies are "losing money and earning money", and the pressure of loss makes the industry quietly reshuffle. Why does this phenomenon occur, and what changes have taken place in household air-conditioning refrigerants over the past year?

▷ The structural conversion of household air-conditioning refrigerants is advancing steadily 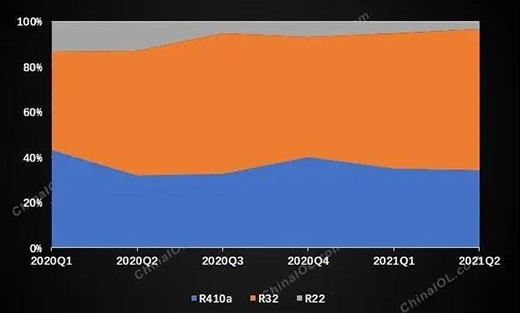 The household air-conditioning industry was hit by the epidemic in 2020. The overall sales scale continued to grow negatively due to weak demand. By the beginning of 2021, the market began to rebound and continued to grow in the first half of the year. At the same time, the tightening of environmental protection and energy efficiency requirements has also promoted the rapid adjustment of the industry's product structure. 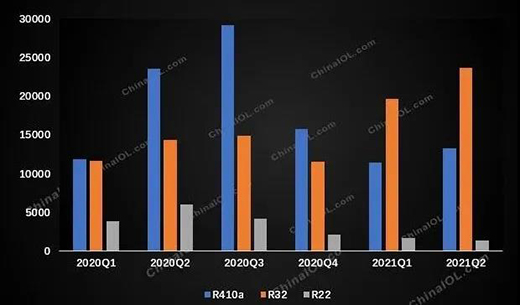 As the demand side air conditioning structure, it has a guiding effect on the supply side refrigerant structure. Affected by the rapid growth in demand, the supply of R32 has increased significantly. At the same time, the adjustment process of R410a to R32 has accelerated, and the supply of R22 for ODS applications has plummeted. However, although the third-generation refrigerant supply scale is bullish, its effective production capacity is basically concentrated in large factories, and the industry is generally not enthusiastic about expansion. According to industry online statistics, as of June 2021, the current capacity of R32 products whose supply scale continues to grow has increased by less than 5% compared to January 2020.

The reason is that, affected by the "Kigali Amendment", major factories have already doubled and expanded their production before 2020. The substantial expansion of production has made production capacity excessively surplus relative to demand, and to a certain extent caused the industry as a whole to start operating under low load. At the same time, it is also for the subsequent major factories to strive for market quotas after the baseline year, and still gritted their teeth and insisted on losing money under the harsh market environment. The phenomenon of impulse and continuous bidding and sales has laid the groundwork for it. 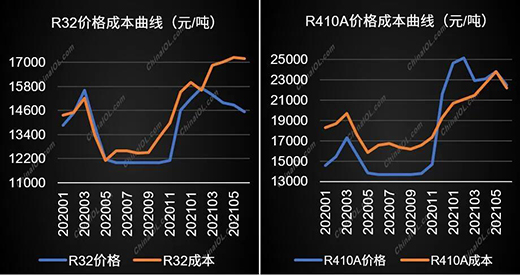 According to industry online statistics, since 2020, the popular product R32 has suffered a loss of around RMB 2,000 per ton, and R410a has also entered the stop-loss range under the influence of this year's policy, and the market is inverted.

The reason is that the price setting is mainly determined by the cost of raw materials and the relationship between supply and demand in the market. In terms of raw material costs, the price of raw material products anhydrous hydrofluoric acid (AHF) has been rising year after year; R125 (one of the components of R410a, R410a is composed of 50% of R32 and 50% of R125) has recently been renewed on the basis of the phased increase in price at the beginning of the year. A sharp increase of 50%, and an increase of 223% year-on-year in August last year, put R410a under high cost pressure.

In terms of supply and demand, before officially entering the baseline year stipulated by the "Kigali Amendment" of 2020-2022, various manufacturers have already doubled and expanded their production. Coupled with the bidding strategy of each factory, the overall supply has increased; and The overall market of the air-conditioning industry is still sluggish, and it is difficult to form a strong support for the demand for refrigerants; and most of the R410a products are foreign trade orders. As the overall foreign trade demand shifts to R143a and the R410a air-conditioning product as a transitional product is gradually replaced, the demand will become weaker. Hair highlights.

Looking at the overall supply and demand relationship, the supply side is struggling to fill the market mainly under policy pressure, but demand is difficult to match, and the market shifts to buyers seriously. Therefore, the supply side of household air-conditioning refrigerants can only be under the dual pressure of oversupply and high cost. Continued loss-making shipments.

▷ Large refrigerant manufacturers lose money and aim for the future

In the context of collective price increases for bulk commodities in the supply chain this year, the "strong" upside down of the refrigerant market appears to be particularly maverick. The raw material market takes the representative copper price as an example. With the gradual recovery of the global economy brought about by the slowdown of the epidemic, the price of copper has more than doubled compared with March 2020 and has continued to rise since the callback in the second quarter of last year. Most of the raw materials in the overall supply chain also have a relatively obvious upward trend as the global economy picks up and shipping is tight.

So, what is the irresistible force that makes the refrigerant industry unswervingly implement the strategy of bidding impulse?

Although the saying goes, "losing money and earning yells", as far as refrigerant is concerned, it is a loss, and it is not only yells that make money. The huge pressure of sustained losses is triggering a quiet reshuffle of the industry through volume competition. In the harsh market environment of competitive bidding, major factories are striving for greater profit margins after the baseline year; however, due to pressure from losses, small and medium-sized enterprises with single products and incomplete industrial chains have vacant production capacity and have to stop or reduce load. Production at the expense of market quotas.

If the current trend continues, after the baseline year, the industry concentration on the supply side of third-generation refrigerants will increase irreversibly, and the initiative in market pricing will fall into the hands of a few companies determined by quotas. In addition, compared with the fourth-generation refrigerant, it has an advantage in cost. If there is no policy guidance, under the seller's market game where the output is limited and the demand is still high, the market price of the existing refrigerant will be stable and tolerable on the demand side. The highest point.

It can be seen that, motivated by the profit margin after the baseline year, the impulse bidding strategy of the major manufacturers of third-generation refrigerants will continue. If there is no other major impact, it is expected that the market characteristics in the next year will not change much, and the price of HFCs refrigerants will remain stable. Weak in the medium.

In addition, due to the dual impact of future refrigerant price increases and product structure adjustments, the structure of household air conditioners may undergo major changes. If the market continues to be sluggish, the future structural adjustment of refrigerants may directly cause the existing supply chain of household air conditioners to become more fragile after a short period of violent fluctuations. However, due to the foreseeable volume reduction and price increase of upstream refrigerants, downstream air-conditioning manufacturers may accelerate their product mix to products that can be adapted to new refrigerants. This will bring a blowout period of technology and opportunities, and the transformation of the industrial structure may inject new vitality into the industry by expanding new customer groups and new application fields.